Please update your bookmarks! The Historian has a new home at https://www.carleton.edu/history/newsletter/historian/ 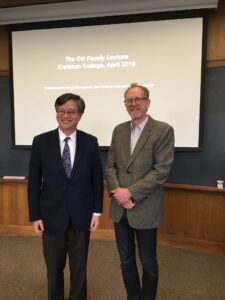 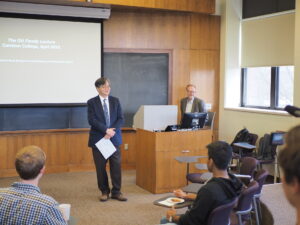 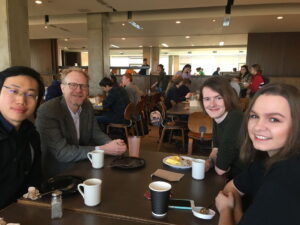 Our first Distinguished Ott Family Lecturer was Christopher Isett, Professor of History and Asian Studies, University of Minnesota. Professor Isett’s public presentation was “China and the Great Divergence: New Findings and Revisiting the Debate.” He provided fresh perspectives about Chinese agriculture and economics and discussed the divergent economic development trajectories of China and Britain stretching back as far as the 16th century. He focused on social and governmental forces that contributed to the so-called “great divergence” in economic development between these two states. His talk attracted many students and faculty from history, economics, political science, sociology-anthropology, and Asian studies.
At breakfast in LDC dining hall, a group of us discussed Taiwanese politics with Professor Isett. We asked in-depth questions about his lecture the previous evening, and also discussed his research. Afterwards, we took a brief tour around campus and several of us described Carleton to Professor Isett and shared our experiences here, both academic and extracurricular.
During lunch with a new group of students Professor Isett discussed his on-going historical research projects in Chinese history, including the study of Maoism and Maoists in countries other than China. Usually people assume that there had been advocates of Maoism in East Germany during the early stage of the Cold War, when the Sino-Soviet split was yet to come. However, he pointed out that Maoism had a considerable impact on West Germany, and recent scholarship continues to investigate this complex and contradictory topic. Some of us shared our historical research activities in different archives around the world. He shared his personal experiences and related his recent historical interest into German Maoists.
Pierce McDonnell ’21, part of our Ott reporting team and also a member of Professor Seungjoo Yoon’s Hist 257 class, reported on the classroom presentation: “When Professor Christopher Isett visited our class on Chinese Capitalism he discussed an interesting chapter he is currently writing about the start of the Great Divergence for upcoming publication in the Cambridge Economic History of the Modern World.” 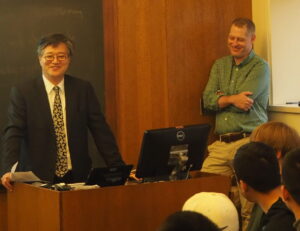 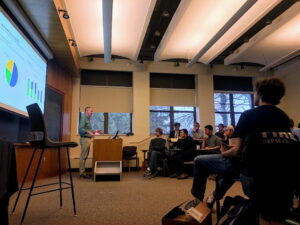 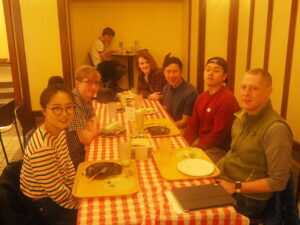 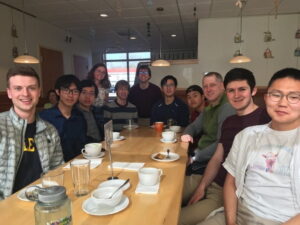 Our second Distinguished Ott Family Lecturer, Brent Irvin, Vice President and General Counsel of Tencent Holdings, Ltd., Shenzhen, China (B.A. Carleton ’94, M.A. Yale, Asian Studies, J.D. Stanford). Brent was a history major at Carleton who worked mainly with Professor Chang-tai Hung. He first visited China in 1991 as part of Professor Roy Grow’s political economy seminar, and has lived and worked in China on and off since graduation. He is currently the Vice President and General Counsel of Tencent Holdings in Shenzhen, the Chinese internet company behind products ranging from WEChat to QQ Music to League of Legends and Fornite.
Brent began his interaction on campus with a group of students at lunch in Carleton’s East Dining Hall. He discussed his experiences working for Tencent Holdings, differences in entrepreneurship between China and the U.S., and the support of start-ups in India.
Later in the day he presented a fascinating lecture, “China’s Innovation Economy.” He explained Tencent and the Chinese internet ecosystem, how Tencent became a global player and a leader in product innovation, how competition and the regulatory environment drive product innovation, regulatory and legal developments, and the important example of Shenzhen, China. This talk was very well-attended by a large group of economics, history, political science, sociology-anthropology, Asian studies, and computer science students.
On Tuesday, April 23rd, Brent Irvin was joined for breakfast by a large group of students at the Brick Oven Bakery in Northfield. We were eager to hear more about his work and his research after attending his talk the evening before. He discussed everything from Chinese internet and gaming policy to memories of his time as a Carleton student with us. He also gave us great advice about navigating the tech job market, graduate school, and language study.
Pierce McDonnell summarized the Hist 257 class presentation, “Brent Irvin shared his experiences of working at the Tencent company and offered broad insights on the innovative technology industry of China’s Pearl River Delta area. Several students explored possibilities for internships at Tencent. He answered the students’ many questions and discussed a wide range of topics from trends in mobile product development to the work environment of Shenzhen, China.” 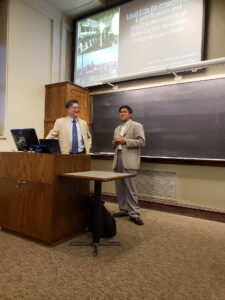 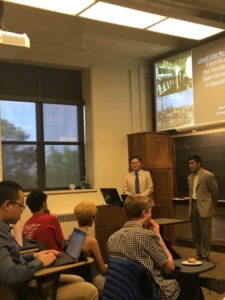 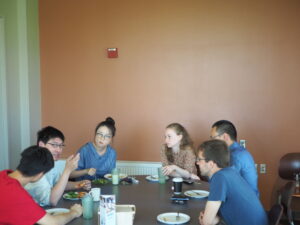 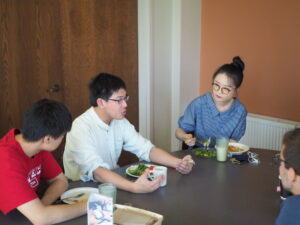 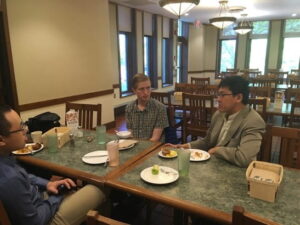 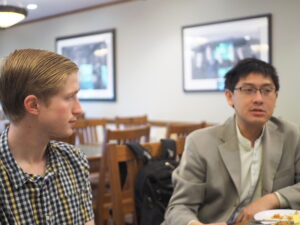 Our third Distinguished Ott Lecturer was Professor Ying Jia Tan, Wesleyan, East Asia and History departments (B.A. University of California, Berkeley, MA Stanford, MPhil Yale, PhD Yale). Professor Tan’s public presentation, “Local Elite Re-Empowered: Electrification and the Transformation of State-Gentry Relations in the Republic of China, 1927-37,” was about his research on electricity as a revolutionary force in wartime China from 1880s to 1950s. His research provides a new perspective on studying modernity and economic development in China because electricity, “distorts time and space, exacerbates inequality and is a driving force of compressed development.” His lecture focused on his research of business history case studies of 1950’s Shanghai electricity and silk manufacturing companies, including the economic history of the silk industry in China from the 1880s to the 1930s. He elaborated on how local gentries in the city of Huzhou in Jiangsu province facilitated the electrification of silk production as a means to combat competition from Japanese silk companies, and how these gentries utilized government rhetoric to advocate against the nationalization of electrical companies. He explained that the history of electricity in China is a parallel history of the tensions between the local gentry, engineer bureaucrats, and the central state. His talk was of great interest to history, Asian Studies, political science, sociology/anthropology, and economics students, among others.
Our student group had an excellent extended lunch and further conversation with him. Professor Tan discussed his experiences both in history and journalism. He shared stories about working in different archives researching economic and historical background items generated by the modernization of electricity in China. He explained the advantages and disadvantages of archival research in the digital age and said that some primary sources are frustrating because they have been too poorly digitized to be used effectively. However, he said, there are an abundance of sources in databases, which can be both a blessing and a curse. He suggested that students “always keep in mind that you need to have a very clear, focused, and researchable topic before you dive into the world of archival resources.”
Pierce McDonnell described Professor Tan’s Hist 257 classroom presentation: “Professor Ying Jia Tan shared insights from his upcoming book on early 20th century electrification in the Republic of China with our class. Tan showed the ways in which electricity played a decisive role in determining the winners and losers of various conflicts, including the victory of the People’s Liberation Army in the Chinese Civil War. Another fascinating part of his presentation was his discussion of the role which engineer bureaucrats played in the state administration.”

Thank you to the Ott Family!
All three of our inaugural Distinguished Ott Family Lecturers’ visits were of great interest to students and faculty across a wide variety of disciplines, and all were especially well-attended by both history and economics students. We wish to acknowledge our deep appreciation to the Ott Family for making this series of exciting visits possible for our history and economics students, faculty, and the many others who also benefited from the opportunities of attending their talks, classes, and small group meetings.

Future Distinguished Ott Family Visitors
Next year, 2019-20, the Economics department will host the Distinguished Ott Family Visitor. Their guest will be Professor Tim Leunig, Chief Scientific Adviser Department for Education; Economic Adviser on Housing Supply, DCLG, Associate Professor, Economic History, London School of Economics. Professor Leunig will be co-teaching a course in world economic history with Jenny Bourne (Chair, Economics Department, Carleton College) in Winter 2020. He will visit during weeks three and four. He will also offer the annual Veblen-Clark lecture for the Economics department and will give a convocation presentation on Friday, January 24, 2020.

The History department is looking forward to again hosting the Distinguished Ott Family Lectureship in 2020-21. 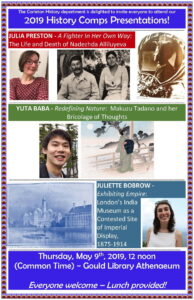 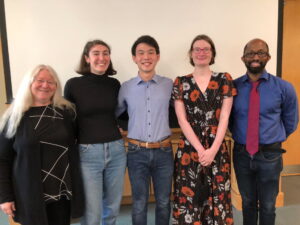 Today, Thursday, May 9th, 2019, our very exciting History Comps presentations took place at the Gould Library Athenaeum at Common Time. Our first speaker was introduced by Professor Thabiti Willis. Julia Preston presented, “A Fighter In Her Own Way”: The Life and Death of Nadezhda Alliluyeva, a biographical study of Nadezhda Alliluyeva, Josef Stalin’s second wife. She began going steady with Josef Stalin at age 15 when he was 38-year old widower, but with surprising ferocity defended her passion for education and independence during a tumultuous marriage. Professor Annette Igra introduced the next two speakers. Juliette Bobrow presented her project, Exhibiting Empire: London’s India Museum as a Contested Site of Imperial Display, 1875-1914, and shared the excitement of discovering that the many meaningful artifacts of the British Raj from the India Museum didn’t die with the closing of the India Museum, but were redistributed in several popular London museums, and what that says about ordinary people’s understanding of empire. Finally, Yuta Baba presented Redefining Nature: Makuzu Tadano and her Bricolage of Thoughts. He explained how Makuzu overcame the intense sexist educational barriers in late Tokugawa Japan and redefined her society’s understanding of Nature. The talks were quite well-attended. We ordered 30 lunches and there were more guests than lunches! Next year we will order more. What a fun annual History event this is – thank you, everyone, for joining us!

Carleton seniors and graduates are invited to apply to a two-year Master’s Program, jointly awarded by Columbia University and the London School of Economics in International and World History.

The curriculum includes a two-year sequence of reading and research seminars, interdisciplinary electives, and foreign language training. At the heart of the program is a two-year dissertation, an original scholarly work based on empirical research and analysis.

Students spend the first year in New York and the second year in London, receiving degrees from both institutions. Graduates are prepared for careers in government, journalism, think tanks, NGOs, and academia. 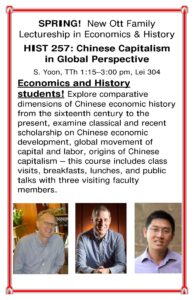 Roger Launius, retired NASA historian and Smithsonian National Air and Space Museum curator, will be giving a presentation called “Why Go to the Moon? Apollo, the Space Race, and the Many Faces of Lunar Exploration at 3:30 p.m. in Best Buy Theater in Northrop on Thursday, February 21st.

Summer Program in Ireland – a few spots are left to sign up!

Study Irish culture, history, and literature on the Carleton Ireland Program this Summer, 2019!  Our program is based in County Mayo, Dublin, and Belfast, with excursions to the Aran Islands, Derry, and the Galway International Arts Festival, and with musicians, writers, and political leaders as guest speakers. There are still a few spaces available; for more information contact Prof. Constance Walker, English Dept. (cwalker@carleton.edu).

THE WORLD IS CHANGING. HELP CHANGE IT FOR THE BETTER.

This summer, learn from inspiring people and places.

At Operation Groundswell, students are given teh tools to create meaningful change in the communities you call home. The program will connect you with inspiring local farmers, artists, educators, and activists who are making incredible change in their communities.

Led by two experienced leaders,their small teams dive straight into life on the ground through immersive homestays and meaningful volunteer work. Local change-makers lead us in improving their communities – sharing their stories along the way.

Operation Groundswell has grants available for students that make their summer programs accessible. 95% of students receive financial assistance grants, which can cover up to 25% of your program fee. More information about the grant is available on their website.

Programs are filling up quickly, so apply as soon as possible. The deadline for summer program applications is March 1st!

START YOUR JOURNEY AT

Great talks last week from Aaron Sparby and Russell Li, this year’s recipients of the Ted Mullin prize. Thanks to everyone who came!